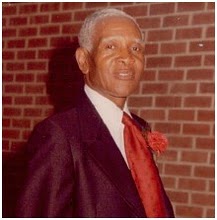 Rev. Simuel Whitfield Simmons, the son of the late Dan and Nettie Simmons, was born February 8, 1914 in Shannon North Carolina. He attended Shannon Elementary School. Simuel was one of eight children. He graduated from Oak Ridge High School in Oak Ridge North Carolina. At an early age he joined St. John Missionary Baptist Church in Shannon North Carolina. While a member there he served in many ministries, Sunday School Teacher, President of the Baptist Training Union, and a deacon at the age of seventeen. He did not heed to GOD’S calling until he was twenty years old and preached his trail sermon in 1932, but it as not until February 20th 1937 that he received his licensed to preach. To better prepare himself after his high school graduation, he enrolled into Shaw University Theological School in Raleigh, North Carolina, September 1938.

Due to lack of funds and a desire for his younger sister to attend beauty culture school, Simuel withdrew from Shaw University in 1941, with only one year left to graduate. He left North Carolina and re-located to Newark, New Jeresy. While there he married his former classmate Mary Jane McKinnon. To this union eleven children were born, in which nine are still living.

Still yearning to be better prepared for his task he enrolled in the Northern School of Religion in Newark New Jersey in 1942. He was employed with the Progressive Life Insurance Company as a agent. He was ordained into the ministry, and organized the Humanity Baptist Church at the home of Mr.Theodore Brock at 51 Rutgers Street, Newark, New Jersey on November 1950.

During the riot of 1967 he served as a food distributor for many victims from his church building. After seeing how many of his fellowmen were affected by the riot, he became president of the Humanity Community Program and served diligently until 1976.

Yearning and determined to continue his education and obtain his degree Simuel enrolled in Shaw University School without walls in 1973 and received his Bachelor of Art’s degree in Philosophy and Religion in May 1974 from Shaw University in Raleigh, North Carolina, at the age of 60.

Board Member to Saults a federal funded program which provided funds to build the program the Georgia King Village housing in the city of Newark.

Board member of United Community Corporation, President of Area Board #2 a subsidiary of U.C.C.